Posted on February 2, 2013 by emptyroadchronicles

If you have a mother, you have undoubtedly heard this statement: “hate is a strong word.”  While it may seem harsh, it is more often than not said in  a manner that is either clownish, hyperbole or fully tongue in cheek.  In order to use hate in its full capacity, a wave of uncontrollable emotions must attack a person’s most inner soul.  There have been times in the past where we found heavy dislike for a car but even the GM J-Bodies have a sort of repulsive charm that make them “okay” or at the very least, laughable.  Because of this, we never really knew if we would ever meet a vehicle we would dislike so much that arduous walking would be the preferred mode of transportation.  On a cold winter’s day however, that all changed as the funky little Nissan Juke found its way onto our driveway.  Initially intrigued by 188 turbocharged and direct injected horses, we got behind the wheel of the strange crossover with honest high hopes.  After all, the Juke contained Nissan’s first U.S.-spec turbocharged four cylinder in ages and how cool is that?  In all honesty, not very cool at all.  Instead of joy, EmptyRoad was assaulted with enough anguish that we were forced to give the word hate a full-blown workout.  Please meet not only our least favorite car of 2012, but our least favorite car of our quarter century lives

The Juke was born from what appears to be absolutely nowhere.  Throw away all concerns regarding its appearance and look at the vehicle compared to the current automotive structure.  At 162.4 inches long and 69.5 inches wide, the Juke is not much bigger than the B-Platform Versa it shares so much with.  Unlike that entry-level compact, the Juke rides 7 inches above the ground, comes available with all wheel drive and is actually called a “crossover”.  This means that it does not compete in the small city car segment but instead, it does battle in a market that is now, rather lonely. After the death of the Suzuki SX4 late in 2012, the Juke was left with not much in terms of competition.  This begs the question, why would Nissan turn a small hatchback into a tiny utility vehicle?  Perhaps they would like the public to buy into the notion that crossovers are safer but simply put, the extra gear amps up the B-Platform’s revenue building abilities.  Take our Juke tester for example.  It came out the door with Rockford Fosgate’s speakers, a spoiler and navigation carrying a price tag of $26,145 which is a dollar-to-size ratio of expensive.  Things seem to get even worse when you realize our tester was not even equipped with the Juke’s party piece: all wheel drive.

So there you have it; when fully equipped, the Nissan Juke can cost very close to $30,000.  Judging by its size alone, the Juke doesn’t seem worth the cost but as history has shown, there is more to a happy ending than just width and girth.  Justification for the Nissan’s entry fee could be found under the hood as its dual cam MR16DDT is rather impressive.  But when one dwells on what else can be had in that price bracket, the sale becomes difficult once again. For the kind of money needed to purchase a fully loaded Juke, a wealth of much better turbocharged speed demons are readily available.  The Mazda MazdaSpeed 3 can be cheaper and makes almost 100 more horsepower plus, it is simply bigger.  A base WRX comes with all wheel drive standard and can be had for less coin as well.  And if you fancy a rear drive boost feed frenzy, $27,000 can get you the 2013 Hyundai Genesis Coupe 2.0T R-Spec which comes with 274 horsepower and adjustable camber bolts.  When faced with those facts and figures, the Juke seems stupid even before you get behind the wheel.  The thing is though, the Nissan is a crossover –  the Hyundai, Mazda and Subaru are not. 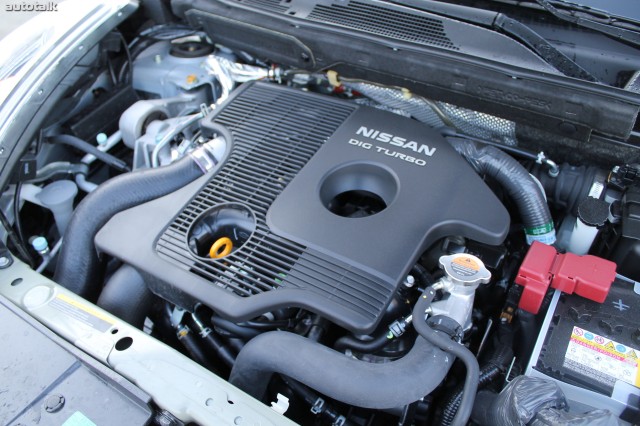 To be fair, our hate towards the Nissan was not born from what’s under the bonnet.  If anything, the little 1.6 liter’s snorty power is the Juke’s only saving-grace.  The mill is eager to rev, good on linear power and makes all the right noises but considering the Juke’s 3,000 lb curb weight, a 0-60 mph time of around seven seconds is just okay. Compared to other vehicles in its price bracket, it isn’t even news worthy and more acceleration could easily be had.  This is where things start to go wrong and the Nissan starts be become annoying.  Our tester, a loaded out front driver, came equipped with what is our least favorite thing in the entire world: a Continuously Variable Transmission (CVT).  For some strange reason, Nissan is absolutely obsessed with the damn things and has been ever since the Murano debuted years back.  While the company may be the pioneers in mass producing the gear less transmission, there is still no example that can match the wonderful simplicity of a box filled with cogs.

With two belts and various tension pulleys, the CVT is, on paper, more efficient than a conventional geared transmission.  In reality however, CVTs have never really worked the way their engineers would hope and the Juke’s is no different.  When called upon in a manner more associated with race tracks, the Juke would do nothing.  After a few hair-raising seconds in which the oncoming vehicle would be much, much closer than first expected, the CVT’s tension pulleys would respond and jump the rev-happy turbocharged engine up to its optimal power output.  Good right? Wrong as without a proper front limited slip differential, the Juke’s chassis is completely incapable of dealing with the engine’s power.  Jittery, nervous and twitchy are all adjectives that describe the Juke’s acceleration patterns.  In short, pulling out into traffic is almost never inspired by confidence and at times, the action can be flat-out dangerous.

Nissan has never really been one for absolute quality and since the 1980s, the other Japanese car maker has always been just that – the “other” Japanese car maker.  Forever in the shadow of Toyota and Honda, Nissan has made strides with certain home runs like the Frontier and GTR but this crossover is a perfect example as to why the manufacture is not as successful in the U.S as it could be.  In terms of overall build quality, the Juke feels exactly like a car that has been in a horrific accident and hastily put back together by a man with two first names.  With the structural rigidity of an overly worn Converse sneaker, the Nissan flexes, creaks and shimmies with every given input.  Even when sitting completely still, the simple act of the windshield wipers doing what they are supposed to do would shake the Juke.  No car with a price tag close to $30 grand and a model year 2012 should tremble from its own windshield wipers.  Then there’s the handling which can be best described as worrisome.  For some incredibly disappointing reason, Nissan will only sell you a front wheel drive Juke with the rear suspension from a truck (or a 15-year-old Maxima as the two are one in the same).  The torsion beam can not supply the amount of grip needed for the Juke to deal with its own power and given the car’s tall stance, body roll is far too present.  Entering a corner isn’t very pretty while exiting can be even worse. The CVT will quickly jump the engine all the way to 11 which then causes the inside front wheel to spin furiously.  Yes, you read that right: the Juke is a front wheel drive, 188 horsepower turbocharged car without a limited slip differential.

So there you have it, the Nissan Juke is too expensive, handles poorly, looks stupid and is built with the kind of effort needed to get a C- on an English 101 first week essay.  This could appear to be the end of the hate but it isn’t as the Juke has something to reveal that will make any gearhead confused and possibly very angry.  If equipped with all wheel drive, the torque steer and traction issues are taken care of and on top of that, the added grip comes with a properly sophisticated multi-link rear suspension.  This means that the uneasy handling characteristics are thus absent so why not just pony up the extra cash and get an all wheel drive Juke?  There is, of course, a terrible and life threatening catch; Nissan will only sell you a proper Juke with a very improper and offensive CVT transmission.  Given its wonderful engine and admittedly nifty interior, the Juke could be a fine little runabout but Nissan refuses to sell it the way they should: with all wheel drive, a 6 speed manual and fully independent suspension.  When a car company denies buyers of what could be, people take notice and as a result, they go somewhere else.  We certainly would and we certainly did.